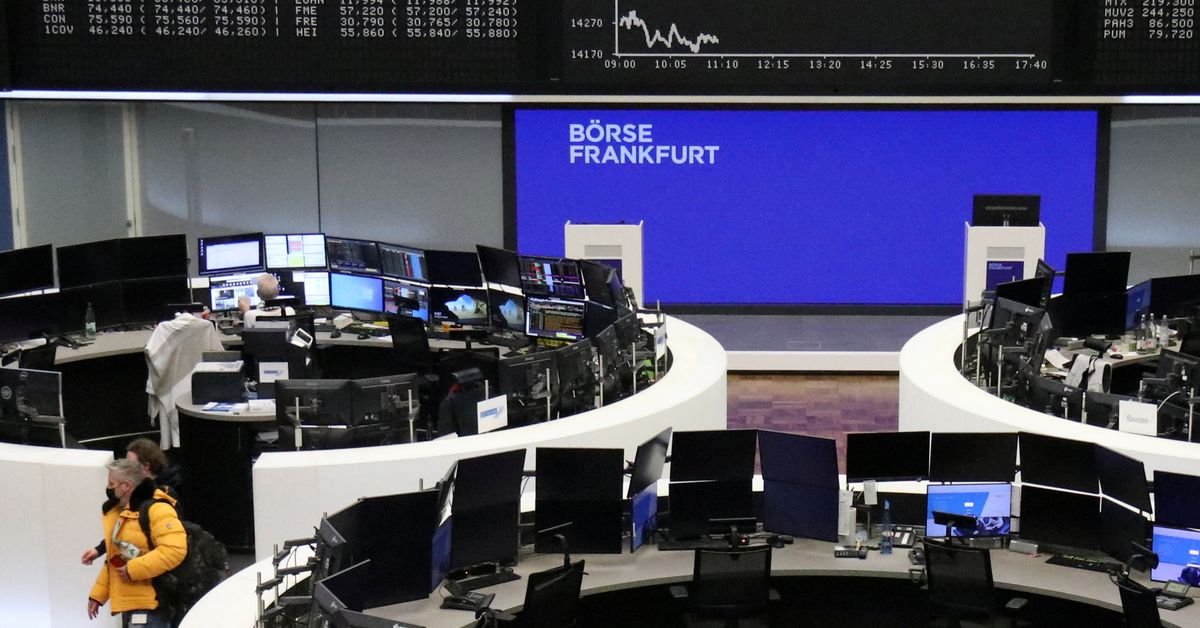 LONDON, Feb 28 (Reuters) – The Russian rouble tanked to fresh record lows on Monday while world stocks slid and oil prices jumped, as the West ramped up sanctions against Russia over its Ukraine invasion, with steps including blocking banks from the SWIFT global payments system.

Russia’s central bank raised its key interest rate to 20% from 9.5% in an emergency move, and authorities told export-focused companies to be ready to sell foreign currency as the rouble slid almost 30% to record lows versus the dollar. read more

As an economic crisis loomed in Russia, the fallout of tougher sanctions from the West imposed over the weekend rippled out across financial markets. read more

At 1130 GMT, European stocks were down 1.5% (.STOXX). European banks most exposed to Russia, including Austria’s Raiffeisen Bank (RBIV.VI), UniCredit (CRDI.MI) and Societe Generale (SOGN.PA), dropped between 10 and 13%, while the wider euro zone banking index (.SX7E) fell 7.1%.

Still, the fall in world stocks was relatively small, with the MSCI world equity index down 0.3%, compared with the 0.6% drop seen last Thursday and 2.4% rebound seen on Friday (.MIWD00000PUS).

“The trading environment is highly dynamic, and we maintain a defensive stance as things could get a lot worse from here,” said Peter Garnry, head of equity strategy at Saxo Bank.

The ramp-up in tensions heightened fears that oil supplies from the world’s second-largest producer could be disrupted, sending Brent crude futures up 4.9% to $102.72. U.S. West Texas Intermediate crude futures were up $4.29 or almost 4.7% at $95.88 a barrel, having hit its highest since 2014 last week. read more

“The global economy now faces, in addition to the risk of even more worrisome strategic escalation in Europe, the certainty of significant economic and financial turmoil in Russia (the world’s 11th largest economy) as well as major disruptions to all trade flows involving the country,” Homin Lee, Asia macro strategist at Lombard Odier, wrote in a note to investors.

“Particularly worrisome is the risk of protracted conflict that disrupts the global supply of key energy, industrial, and agricultural commodities as both Russia and Ukraine play important roles in these markets.”

As uncertainty continued to grip markets, investors plumped for the safety of the dollar, Swiss franc and Japanese yen.

Sovereign bonds such as the U.S. Treasuries and German Bunds — regarded as among the most safest assets to hold globally — remained in strong demand.

Money markets continued to push back rate hike expectations with investors now pricing roughly 30 basis points worth of tightening from the European Central Bank in total this year, down from 35 bps late last week. read more

Russia’s rouble dived almost 30% to a record-low 120 per dollar, but recovered some ground to last trade at just over 95.559 to the dollar .