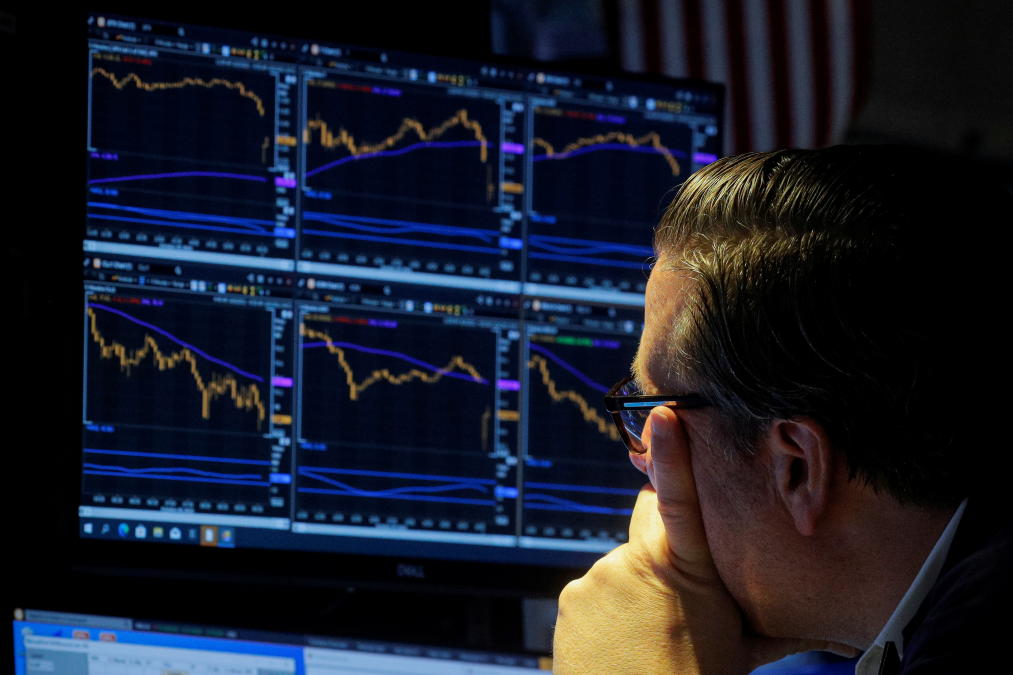 Wall Street’s main benchmarks rallied on Tuesday as investors weighed a potential de-escalation of geopolitical tensions between Russia and Ukraine following news some Russian military units will start returning to their permanent bases after completing drills near the Ukrainian border.

Russian President Vladimir Putin said Tuesday he was open to security discussions with the West on negotiating the crisis but emphasized responses from the United States and NATO members to Moscow’s security demands failed to meet the Kremlin’s requests.

President Joe Biden in a speech on Tuesday said the United States was prepared “no matter what happens.”

“We are ready with diplomacy, to engage in diplomacy with Russia and our allies and partners to improve stability and security in Europe as a whole,” he said. “And we are ready to respond decisively to Russian attack on Ukraine, which is still very much a possibility.”

Fears that the Kremlin would green light a move to force in on Ukraine as soon as this week have created a new headwind for global markets worried the conflict could exacerbate inflation and spur other economic disruptions.

“The general consensus is that we are going to be on a high simmer, at least for the foreseeable future,” Raymond James Washington policy analyst Ed Mills told Yahoo Finance Live on Tuesday. “Putin has a lot of incentive to continue the pressure but also to drag this out.”

The geopolitical tensions add to the uncertainty around central bank policy that has dominated market sentiment in recent months. Earlier in the session, the U.S. Bureau of Labor Statistics reported its U.S. Producer Price Index (PPI) rose 1%, notching another monthly gain in January and adding to a series of hot inflation prints, reiterating calls on the Fed to raise interest rates. The print comes after the Labor Department reported last week its Consumer Price Index (CPI) notched a steeper-than-expected 7.5% increase over the year ended January to mark the largest annual jump since 1982.

“Factories are producing more inflation than goods at this point and with supply and labor shortages not going away, inflation is going to stay on the front burner of Federal Reserve officials’ concerns for now,” FWDBONDS chief economist Christopher S. Rupkey said in a note. “The Fed is going to start moving up interest rates to curb economic demand, but if inflation keeps going, consumers will stop buying all on their own because they can’t afford it.”

“The escalation of Russia and Ukraine tensions come at a time when the stock market is already vulnerable given inflation worries and the potential for Federal Reserve tightening,” Sanders Morris Harris Chairman George Ball said in a note. “If an armed conflict between Russia and Ukraine is somehow avoided, a short-lived relief rally is likely, but there are still too many worries on the horizon for any type of longer lasting upward move higher in stocks.”

“Inflation is way above their target and has gained momentum across the economy,” he said in a note.

On the other hand, Comerica Wealth Management Chief Investment Officer John Lynch pointed out in a note that despite recent volatility in interest rates and equities, areas of the fixed-income markets have exhibited less turbulence. With corporate credit stress limited for investment grade and high-yield bonds, 10-year breakeven inflation expectations remain contained.

“We believe it is important for investors to focus on market signals, rather than headlines, while also respecting traditional patterns for prices, interest rates, and equity valuations,” Lynch said.

Here’s how Wall Street’s main benchmark’s fared at the end of Tuesday’s session:

Here were the main moves in markets during midday trading Tuesday:

The Federal Aviation Administration (FAA) said it will retain authority over performing final inspections on each of Boeing’s (BA) newly built 787 Dreamliner jets once the company resumes deliveries, dealing a blow to the newly-produced aircrafts.

The agency’s move will allow it “to confirm the effectiveness of measures Boeing has undertaken to improve the 787 manufacturing process.” Boeing’s new jet has been plagued by issues after the discovery of a problem with the way sections of the plane were joined.

House Transportation Committee Chair Peter DeFazio and Rick Larsen, who chairs a subcommittee on aviation asked the Transportation Department’s Office of Inspector General to review the FAA’s oversight decision. The lawmakers indicated the FAA did not provide an adequate response to a November letter seeking answers about Boeing actions before two fatal Boeing 737 MAX crashes killed 346 people in five months.

Shares of semiconductor companies advanced in morning trading, contributing to broad-based gains across the technology sector.

Other semiconductor peers also traded higher early Tuesday. Shares of Nvidia (NVDA) gained 7.08% to $259.84 a piece. The company is scheduled to report fourth quarter results on Wednesday. Analysts at Piper Sandler expect “a significant beat and raise” on strong performance in its gaming and data center businesses.

Advanced Micro Devices (AMD) was up 2% to 116.58 per share after the company closed its acquisition of Xilinx on Monday in a record deal for the chipmaker industry valued at $50 billion.

“There’s tremendous investment that’s happening across the semiconductor industry, whether you’re talking about on the wafer side or on some of the substrates or the back-end assets, so we are making progress,” AMD CEO Dr. Lisa Su said in an interview with Yahoo Finance Live. “I do believe that the first half of this year will continue to be quite tight, but the second half of this year, I think things will get a little bit better.”

U.S. producer prices recorded another monthly jump in January amid continued supply chain disruptions, serving as yet another indicator of persisting inflationary pressures.

The U.S. Bureau of Labor Statistics reported its Producer Price Index (PPI) for final demand rose 1% during the month of January, seasonally adjusted. Economists had forecasted an advance of 0.5%, according to Bloomberg consensus estimates.

Final demand prices moved up 9.7% on an unadjusted basis for the 12 months ended January 2022. Economists polled by Bloomberg called for a 9.1% year-over-year advance.

PPI gauges the average fluctuation in selling prices by manufacturers to business and serves as a leading measure of consumer inflation.

The jump in producer prices last month follows advances of 0.4% in December 2021 and 0.9% in November.

Restaurant Brands International Inc. (QSR) reported fourth quarter results on Tuesday that beat estimates on revenue and profit, powered by a surge in online sales and a recovery in demand at its Burger King and Tim Hortons chains as consumers increasingly dine out.

The company’s global digital sales rose more than 65% to $10 billion in 2021 on the heels of efforts by Restaurant Brands and its fast-food chain peers to boost investment in e-commerce as more people ordered their food online during the pandemic.

With more Americans vaccinated and COVID restrictions easing, consumers have also increasingly returned to in-person dining after the virus kept people away from eating out.

Tim Hortons, which typically accounts for the greater half of Restaurant Brands’ revenue, saw an 11.3% increase in comparable sales in Canada, while same-store sales at Burger King in the United States rose nearly 2%.

Here were the main moves on Wall Street in pre-market trading Tuesday:

Here were the main moves in markets ahead of overnight trading Wednesday: