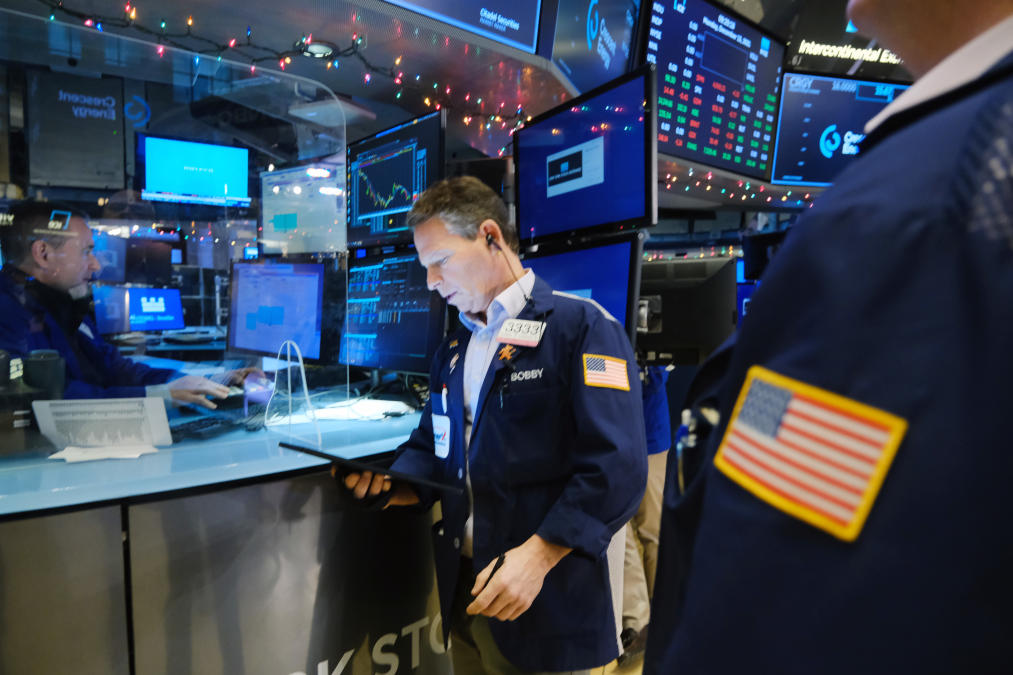 Stocks fell on Friday to extend Thursday’s losses, with equities ending a volatile week in the red as investors assessed the ongoing risk of the Omicron variant and the Federal Reserve’s signals for potentially multiple interest rate hikes next year.

The S&P 500 and Dow declined sharply while the Nasdaq traded slightly lower after a sell-off on Thursday. The Dow was the biggest laggard on the day, shedding more than 1% as shares of financials including Goldman Sachs (GS), and JPMorgan Chase (JPM) lagged.

Shares of FedEx (FDX) jumped after the shipping giant raised its full-year earnings forecast, delivered better-than-expected fiscal second-quarter results and authorized a new $5 billion stock buyback program. Rivian (RIVN), meanwhile, saw shares sink following its first quarterly report since its IPO last month. The electric-vehicle maker said in its shareholder letter it expected to be “a few hundred vehicles short” of its prior target of producing 1,200 units by the end of this year.

Investors’ main focus this week has remained fixed on the Federal Reserve’s updated outlook on monetary policy for next year, with the central bank’s projections delivered mid-week suggesting the Fed could hike interest rates three times next year.

The specter of higher rates — and a lower-liquidity environment as the central bank also speeds up the tapering process of its asset purchases — has continued to weigh heavily on longer-duration technology and growth stocks valued heavily on future earnings potential. The Nasdaq Composite had underperformed to drop 2.5% on Thursday and give back all of its gains after a rally on Wednesday. The index has fallen by 5% over the past month through Thursday’s close. And shares of some notable technology stocks extended declines on Friday, with Apple (AAPL) shares dropping by about 1% after a nearly 4% decrease on Thursday.

On the other hand, cyclical stocks in the energy and financials sectors outperformed on Thursday, with the prospects of higher interest rates and stronger growth seen as benefitting these sectors.

“The thing investors have to understand is, we’re going through a major transition in monetary policy,” Troy Gayeski, FS Investments chief market strategist, told Yahoo Finance Live on Thursday. “The Fed has been running emergency policies arguably far longer than they should have been, and as that money supply growth slows down as they ease off the balance sheet expansion and ultimately hike next year, one would at least expect more volatility in markets. And that’s really what we’ve been seeing the last month.”

“The biggest difference between now and six months ago, or even more than a year ago, is you could pretty much go long anything and you were confident it was going to go up. The economy was booming, we had a lot of fiscal stimulus, we still had unprecedented monetary policy stimulus,” he added. “And it’s a very different environment in 2022 where you’re going to have to pick and choose much more carefully.”

Bitcoin prices slid on Friday for a fifth consecutive week, tracking declines in other risk assets on expectations of tighter monetary policy amid higher inflation.

Prices for the largest cryptocurrency by market capitalization were down nearly 4% to trade near the $46,000 mark as of Friday afternoon. Other major cryptocurrencies including Ethereum also came under pressure, dropping more than 4% to dip below $3,900.

Shares of stocks including AMC Entertainment (AMC), GameStop (GME), and BlackBerry (BB) jumped on Friday as investors bought the dip in shares of riskier assets from earlier this week.

AMC shares were up more than 17% mid-morning on Friday. Previously shares had fallen by 42% in the month through Thursday’s close, as volatility returned to the darlings of the meme trade from earlier this year. GameStop shares also advanced to reverse some losses after a 31% drop over the past month.

Still, for the year-to-date, these stocks have risen sharply, largely due to a surge in interest at the beginning of this year. Shares of AMC were up 1,053% for the year-to-date through Thursday’s close, while GameStop shares were up 667% over that period.

The three major indexes opened in the red and headed for a back-to-back day of losses on Friday, with technology stocks getting hit for another session. The Nasdaq dropped nearly 1% just after the opening bell, while the Dow dropped about 200 points, or 0.5%. The S&P 500 dropped another 0.7%.

Here’s where markets were trading as of Friday morning ahead of the opening bell:

Here were the main moves in markets as the overnight session kicked off on Thursday: