Premarket stocks: Peloton is wounded. Amazon, Nike or Apple could buy it 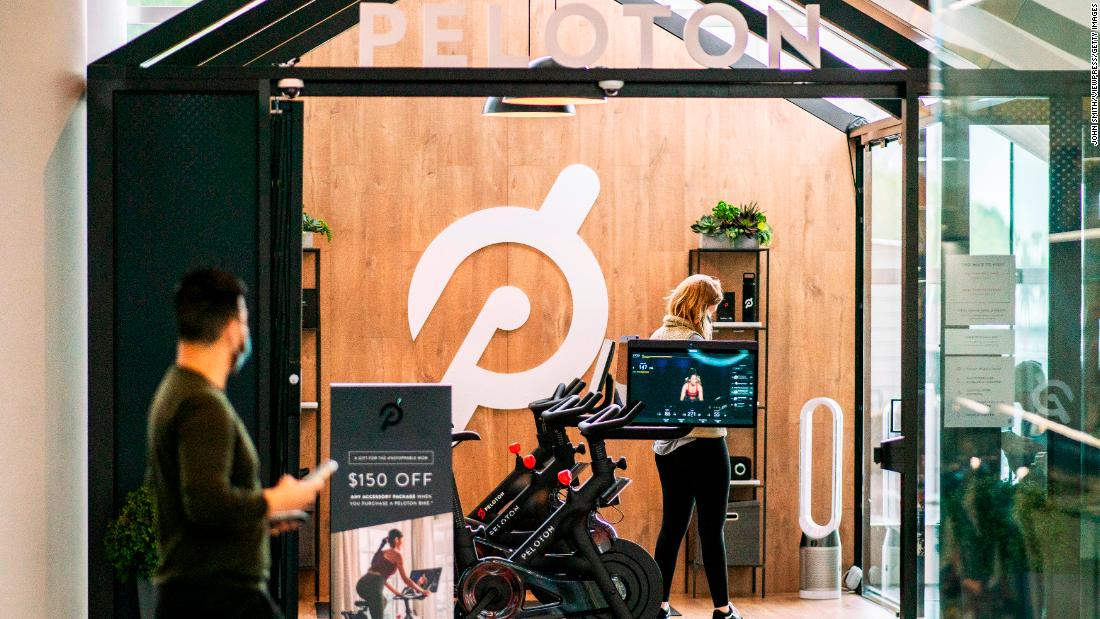 The company’s exercise bikes were a huge hit early in the pandemic. Now, it’s struggling to maintain its growth as people spend more time outside their homes — and would-be buyers are circling.
What’s happening: Peloton’s stock gained 17% on Monday following reports that Amazon (AMZN) and Nike (NKE) are exploring bids for the company. One analyst has also suggested Apple (AAPL) as a possible suitor.

“We would be shocked if Apple is not aggressively involved in this potential deal process,” Wedbush Securities analyst Dan Ives said over the weekend.

Quick rewind: Plenty of firms clearly smell a deal. Peloton’s shares have plunged more than 80% from their high in January 2021. They’ve come under renewed pressure in recent weeks following a report that the company had stopped manufacturing new bikes and treadmills.

CEO John Foley has denied this, but said Peloton is “resetting” production levels as it adapts to more “seasonal demand curves.” He acknowledged the need to slash costs, and said the company is “considering all options as part of our efforts to make our business more flexible,” including layoffs.
Blackwells Capital has a different idea. The activist investor recently said it has “grave concerns” about Peloton’s performance and is calling on its board of directors to fire Foley and explore a sale.
The case for Amazon: Multiple news outlets have said Amazon is interested. The online retailer has started ramping up its health and wellness offerings, launching the wearable Halo fitness tracker in 2020.

But it could be an awkward fit, according to Cowen analyst John Blackledge, who noted on Monday that Amazon “typically sells mass market products [and] services,” while Peloton — whose entry-level bike costs $1,495 — is more of a “premium” brand.

The case for Nike: The Financial Times reports that the apparel giant weighed an offer for Peloton before it went public in 2019, but ultimately decided not to proceed. Could it take another look now?

The case for Apple: Apple took on Peloton in 2020 with the launch of its subscription service Fitness+, which is compatible with the Apple Watch. But Ives thinks joining forces would be a smart move, since it would rapidly ramp up Apple’s customer base in this category and “catalyze the company’s aggressive health and fitness initiatives.”

Apple has been shy about making flashy acquisitions. Its last high-profile deal was for Beats in 2014, which had a price tag of $3 billion. But it’s sitting on plenty of cash, should it be tempted.

Maybe no one wins: Blackledge at Cowen thinks it’s “unlikely” that a Peloton sale will come together in the end, pointing out that the company’s share structure means that insiders including Foley have a vise grip on the firm.

“We expect they are likely to continue to pursue the company’s long-term strategy independently, at least for the foreseeable future,” Blackledge wrote.

Coming up: Attention will be on Foley when the company reports results from its latest quarter on Tuesday. Will he address deal chatter?

Last week was one for the history books, as some of the biggest US stocks made dramatic moves.

Facebook (FB) shares plunged 26% on Thursday after it posted a disastrous earnings report, wiping nearly $240 billion off the company’s market value. It was the biggest loss for an S&P 500 company on record, according to data from Refinitiv.

Then, on Friday, jittery investors piled into Amazon, relieved by what they saw in its results.

The company’s stock jumped 13.5%, adding more than $190 billion to its market value. That was the biggest gain on record for an S&P 500 firm.

Why it matters: The magnitude of the swings is notable. But so is the impact these single names had on the broader market. The S&P 500 fell 2.4% on Thursday, while the Nasdaq Composite plummeted 3.7% — its worst performance since September 2020. On Friday, Amazon’s rally (along with a strong jobs report) helped both indexes log gains.

I’ve spent a lot of time in this newsletter looking at how the market has become increasingly concentrated, with just a few tech companies exercising more and more sway over key indexes tracked by investors.

Recent volatility underscores why that’s important. These days, as Facebook or Amazon goes, so goes the market — especially if it catalyzes sell-offs or buying sprees for other stocks in the sector. It’s a vulnerability Wall Street should be wary of as it eyes what comes next in the wake of the pandemic.

The pandemic’s cleaning phase is winding down

When Covid-19 first arrived in 2020, people rushed to buy disinfecting wipes and other sanitizing products.

But as we’ve learned more about the coronavirus — and agencies like the US Centers for Disease Control and Prevention have deemphasized the likelihood of getting it via surfaces — that phase of the pandemic appears to have come to an end.
See here: Shares of Clorox (CLX) fell 14.5% on Friday after the company reported its latest results. It said that net sales for its health and wellness unit declined 21% compared to the same quarter one year ago.

That doesn’t mean our newfound obsession with cleaning has disappeared entirely. Sales are still up sharply compared to the same period two years ago, and executives said that demand remains “robust.”

But they expect it to moderate in the second half of this year, allowing the company to step out of some agreements with third-party suppliers that were used to build up inventory.