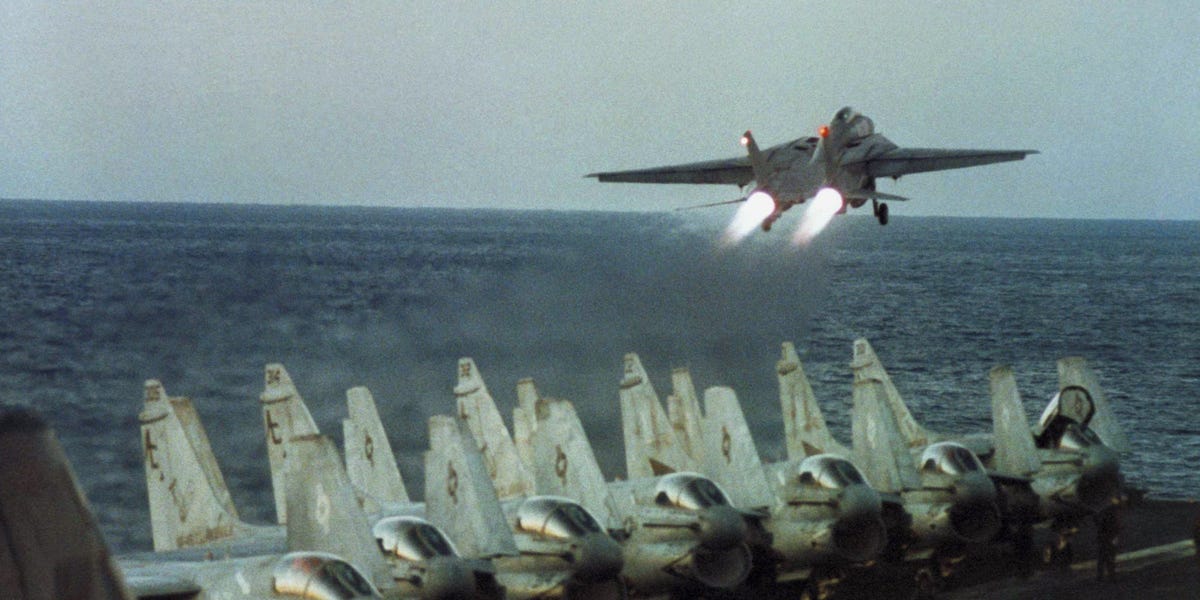 On January 4, 1989, the US Navy aircraft carrier John F. Kennedy was sailing through the Mediterranean Sea with numerous aircraft from its air wing aloft for training exercises and patrol missions — a common practice while carriers are at sea.

At 11:55 a.m., one of those planes, an E-2C Hawkeye airborne early warning and control aircraft, detected two Libyan Air Force MiG-23s taking off from an air base in northeastern Libya and heading toward the carrier.

Two nearby F-14 Tomcats were ordered to intercept the MiGs. The air battle that followed was a victory for the Tomcats, but it soon became a headache for the Pentagon.

By the late 1980s, US-Libya relations had deteriorated, driven in part by territorial disputes in the Mediterranean.

In 1973, the Libyan dictator Muammar Gaddafi claimed almost all of the Gulf of Sidra as territorial waters and declared that any crossing of his “Line of Death” would receive a military response.

The US categorically rejected the declaration and conducted freedom-of-navigation exercises with warships and aircraft in defiance of Gaddafi’s claim. Consequently, there were numerous intercepts and standoffs in the airspace and waters around Libya, some of which turned violent.

In 1981, US Navy carrier aircraft shot down two Libyan Su-22 fighter-bombers in the Gulf of Sidra. In March 1986, a clash with the US Navy left dozens of Libyan troops dead and multiple Libyan ships sunk or damaged. That April, the US bombed dozens of Libyan targets, including Gaddafi’s residence, in retaliation for a Libyan-sponsored terrorist attack in Berlin.

All the while, Gaddafi continued supporting terrorist groups with training, equipment, and financing. In 1988, the situation became even more tense when the US accused Libya of attempting to build a chemical-weapons plant.

The USS John F. Kennedy was sailing to Haifa for a scheduled port visit amid those tensions, but the carrier was not in the Gulf of Sidra. It was actually some 120 miles north, closer to Crete.

Regardless, two Libyan MiG-23s from Al Bumbah airfield near Tobruk were dispatched and flying toward its general location.

The two Navy F-14s tasked with intercepting them, call signs Gypsy 207 and Gypsy 202, arrived in radar-tracking range within minutes. Soon the four aircraft were approaching each other some 70 miles from Tobruk.

Flying at high speeds, the F-14s conducted a series of turns and lowered their altitude. The Libyans matched these turns and even accelerated to ensure they were approaching the Tomcats head on.

As the MiGs closed in, the Americans worried they might be carrying Soviet-made AA-7 Apex missiles, which have a 12-mile range. Kennedy’s air-warfare commander warned the pilots that the MiGs could be preparing to attack and gave them permission to fire if they felt the aircraft were hostile.

The Tomcats had taken position underneath the MiGs, which allowed them to use ocean clutter to confuse their radar — a tactic learned by training against secretly acquired MiG-23s back in the US — and made five more turns that were matched by their Libyan opponents.

Now less than 20 miles from the Libyan jets, the Americans armed their weapons. At 13 miles, the radar intercept officer aboard Gypsy 207, Cmdr. Leo Enwright, fired an AIM-7 Sparrow at one of the MiGs — without telling the pilot, Cmdr. Joseph Connelly, beforehand — but the missile failed to track. Enwright fired a second missile at 10 miles, which also failed.

The two F-14s then conducted a defensive split — Gypsy 207 turned left and Gypsy 202 turned right. The MiGs turned and headed straight for Gypsy 202, whose radar intercept officer, Lt. Cmdr. Steven Collins, fired an AIM-7 that hit one of the MiGs at a range of roughly 5 miles.

Gypsy 207 then took position behind the other MiG and, after some difficulty acquiring a lock and some colorful language, fired an AIM-9 Sidewinder that brought down the Libyan fighter.

Before returning to the carrier, both F-14s reported seeing the Libyan pilots eject and deploy parachutes.

A headache at home

Though a victory, the shoot-downs became a bit of a headache for the Pentagon and the Reagan administration.

After the incident, Libya claimed the Americans had shot down two unarmed reconnaissance planes. Gaddafi claimed it was ”official US terrorism” and called for an emergency meeting of the UN Security Council to condemn the US’s actions.

Other Arab officials, including Yasser Arafat, said the incident would negatively affect Arab-American relations and set back the Middle East peace process.

The Pentagon repeatedly defended the actions of the F-14 crews, saying the MiGs displayed “clear hostile intent” and the US jets were justified in firing. “If anything, they fired too late,” Defense Secretary Frank Carlucci said.

The US Navy also released footage from one of the F-14s showing that at least one of the MiGs was armed with two AA-7 Apex missiles and two AA-8 Aphid missiles. A Pentagon spokesman said the video debunked Libya’s claims about the US shooting down reconnaissance aircraft, though media reports at the time noted that the video was blurry.

The Pentagon did acknowledge the MiGs never turned on their on-board radars needed to guide their Apex missiles toward the US jets.

Rep. Les Aspin, the chairman of the US House Armed Services Committee, later said that according to secret Pentagon briefings and discussions with Egyptian President Hosni Mubarak and other government officials, the MiGs’ turns were too slight to be considered hostile.

Aspin and Navy aviators interviewed at the time also raised doubts about the Pentagon’s characterization of the F-14’s actions as “avoidance” maneuvers. The pilots said they appeared to be standard intercept maneuvers.

Aspin did say, however, that the F-14s’ actions were justified given the speed at which the MiGs were approaching and the Libyans’ record of shooting first in previous engagements.

The Libyan pilots’ mission remained unclear after the incident and was not likely to ever be known, Aspin said in March 1989, and while the Libyan pilots were seen ejecting and parachuting into the sea, it’s unknown whether they were ever recovered.