The trend away from brick-and-mortar stores toward e-commerce is undeniable. In 2019, 15.2% of total third-quarter retail sales were conducted online. That statistic rose to 18.8% during 2020, fueled by pandemic behaviors. It has receded to 18.1% in 2021, but a two-year 3% gain is massive considering it represents market share of $34 billion. E-commerce is expected to capture around 23% of retail sales by 2025. Investors were rewarded during 2020 for choosing online retailers, yet the market favored physical stores rather than their digital counterparts in 2021.

During the last month of the year, investors should begin looking for potential 2022 e-commerce winners. Etsy (NASDAQ: ETSY), Shopify (NYSE: SHOP), and MercadoLibre (NASDAQ: MELI) are three companies in this space whose stocks have the potential for a strong 2022.

Etsy has made itself the primary marketplace for custom, unique, and handmade goods often produced by smaller businesses. Wanting to expand, it acquired Depop — a person-to-person fashion resale marketplace — and Elo7 — the Brazilian version of Etsy — both of which it acquired this summer around the same time. As it transitions into a “house of brands,” Etsy is capturing a non-standard e-commerce market portion.

Up around 30% this year, Etsy rose after it reported third-quarter results on Nov. 3 but gave back all of those gains during the recent sell-off. Its Q3 results were solid, with both gross merchandise sales (GMS) and revenue rising 17.9%. Habitual buyers — those who purchase items on six separate days and spend more than $200 doing it — rose 65%. Growing this cohort is key for Etsy, as they are consistent customers.

Fourth-quarter guidance was nothing spectacular; management projects 12% GMS and 10% revenue growth. Still, anything can happen during the holiday season. With global supply chain issues, consumers may use Etsy to fulfill their holiday shopping lists.

Etsy is consistently profitable, posting an impressive 33% adjusted earnings before interest, taxes, depreciation, and amortization (EBITDA) margin, making it the most conservative pick between the three. It is also the smallest company of these three by market cap, allowing new verticals like Depop to have a quicker revenue impact.

For many years, launching a small business e-commerce website was difficult. Shopify’s founder, Tobias Lütke, recognized this problem in 2004 when he launched a snowboard shop. Fifteen years later, Shopify supports 3.6 million jobs around the world.

Shopify charges its customers both a subscription fee for maintaining a customer’s website and a merchant solution fee that takes a slice from each item sold. The larger its clients grow, the more Shopify makes. This makes its gross merchandise volume (GMV) an invaluable business metric. Its GMV increased from $15.4 billion to $119.6 billion from 2016 to 2020. More recently, Q3 GMV rose 35% to $41.8 billion. Throughout the first nine months of 2021, Shopify’s GMV totaled $121.3 billion, greater than 2020’s total GMV.

From its GMV increase, Shopify realized 46% Q3 revenue growth. When a company is growing quickly, investors should be encouraged when it sacrifices profitability for growth, as it is capturing as much market share as possible.

Although Shopify made an impressive $9.94 earnings per share (EPS) in Q3, most of the earnings came from unrealized gains through Shopify’s Affirm (NASDAQ: AFRM) initial public offering investment. Shopify just breaks even when the investment is subtracted. Bears will point to Shopify’s inability to make a profit, but that is by choice. It could cut back on spending, but Shopify is becoming the best and biggest business it can be.

MercadoLibre is bringing Latin America e-commerce solutions, shipping logistics, and digital payments. It operates in 18 countries, with Brazil, Argentina, and Mexico providing the most business.

In its marketplace division, MercadoLibre’s GMV increased 30%. While it isn’t as impressive as Shopify’s, it is being compared to 117% growth a year ago. Its total payment volume (TPV) increased a currency-neutral basis (FX) 59%.

Overall, Q3 FX revenue grew 73%, the first quarter in the last five where growth was less than 100%. Like Shopify, it is not focused on turning a profit. MercadoLibre’s operating expenses grew at 62%, a positive sign because its expenses are not increasing faster than its revenue growth. MercadoLibre should be valued based on its price-to-sales (P/S) ratio because it is not optimized for profits. This metric has reached a low not seen in five years. 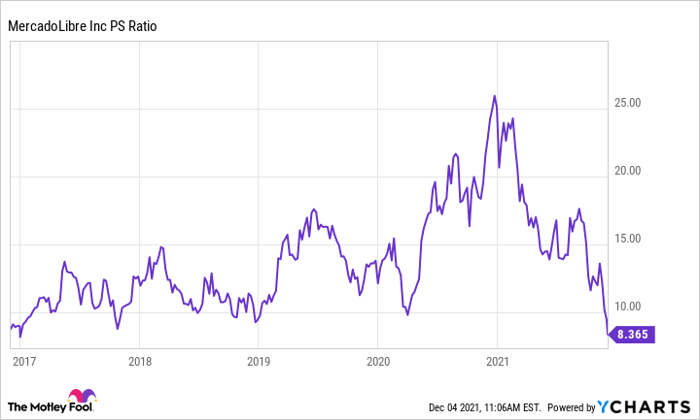 Because MercadoLibre’s business is conducted with several currencies, exchange rate fluctuation is a risk. However, long-term investors can mostly ignore this because MercadoLibre doesn’t actually convert its income to U.S. dollars, it just reports in U.S. dollars because it is listed domestically. Still, some countries MercadoLibre operates within can have political instability presenting a theoretical risk that may or may not come to fruition.

All three e-commerce stocks are down more than 20% from their all-time highs. Yet, the businesses are executing well and exist in an expanding industry. Investors looking for growth at a discount should consider adding these three stocks to their portfolios.

10 stocks we like better than Etsy
When our award-winning analyst team has a stock tip, it can pay to listen. After all, the newsletter they have run for over a decade, Motley Fool Stock Advisor, has tripled the market.*

They just revealed what they believe are the ten best stocks for investors to buy right now… and Etsy wasn’t one of them! That’s right — they think these 10 stocks are even better buys.